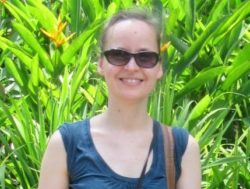 It is a specialist skill to write in a manner that is accepted and credible in the academic realm. To complicate matters, different scientific journals have varying styles and expectations. The acceptance of a paper for publication does not only hinge on the brilliance of the scientific work, but also on the manner in which it is conveyed – the words, the flow of thoughts, the quality of literature references and so on.

Joanna used to be a postdoctoral researcher in microbiology who now works as a freelance substantive scientific editor. When her academic future looked uncertain, her forward-looking attitude, profound expertise and strong work ethic have allowed her to carve out this new career for herself.

Tell me a bit about your scientific background.

I trained for an MSc and PhD in bacterial genetics focusing on antibiotic resistance at the University of Gdansk in Poland for 9 years. We were expected to work in another lab before finishing our PhD. Whilst everybody else in my lab was involved in transcriptomics, I decided to try out proteomics. I had this opportunity thanks to a Marie Curie fellowship, which took me to the Rowett Institute in Aberdeen, Scotland for half a year where I worked with anaerobic bacteria. I used that experience in my first postdoc on the proteomics of anaerobic gut/gingiva colonisers and enzymology in Halifax, Nova Scotia, Canada. From there, I went on to another postdoc in Umea, Sweden – this time proteomics of acid-loving archaea. My final 5-year senior postdoc position was on host-microbe interactions during fungal infections at the University of Aberdeen.

Why did you choose to work in the field of microbiology?

I’ve always been more interested in microbes than animal physiology. Most of our genetic and biological coursework was based on microorganisms, and so I already knew quite a bit about these. At the time of my MSc, I had the choice between studying bacteria, plants or cell lines at a medical academy. I felt that microbiological research would give me more scientific freedom. Also, I liked the flexibility of a university work environment. I, therefore, decided to stay at a molecular biology university lab. During my career, I worked my way up the evolutionary tree from E. coli via archaea to fungi, and my model systems became more complex and sophisticated.

As a researcher, I wanted to explore how different processes come together and work on a higher level. I wasn’t too keen on drilling down into the detail of any specific protein or gene. I wanted to see how everything works with everything else. Microorganisms were a good tool to do that.

Why did you end up quitting lab research?

I tried not to leave, but then it occurred to me that I wouldn’t be able to do research on my own terms if I stayed. When I was finishing my last placement, I felt finally ready to start my own group and become a PI [principal investigator]. That’s when I found myself in a catch-22 situation –  too experienced to apply for early career funding, not experienced enough to compete with established investigators. I could have gone on to do another postdoc. Sure. But after a while, you grow tired of the nomadic lifestyle – 2 years here, 3 years there, is not as enticing as right after the PhD. I did not want to keep travelling, constantly proving myself and doing other people’s science.

My friend works at a big publishing house in Germany. She suggested I look into editing; and here I am.

What exactly is a ‘substantive science editor’?

Substantive science editing is about taking a text and revising it so that the author’s meaning is clear, the story flows, the logic is strong, and the scientific arguments are sound. In other words, not simply concentrating on the correctness of expression and language, but also on the best way of showcasing the science.

How did you get started as an editor?

I looked for job ads for freelance editors and applied. With most editing houses, except Peerwith, I had to pass an editor test which involved working on a sample text. Then I was on a probation period, ca. 3 to 5 assignments, during which I received guidance to get me to work to their standards. In-house editing styles differ between agencies, and you’ve got to get used to them. Initial assignments during this phase were slightly less well paid because an in-house editor had to thoroughly check my work before the client received it. Once they were convinced that I reliably produced good edits, I started receiving normal rates. By the way, rates can vary greatly between agencies.

In the beginning, I accepted projects with pretty short deadlines. Once I had more experience, I managed to gain more freedom. Now, I can plan roughly a week ahead because my workload is more predictable.

A good question to ask an editing house at the start is how many assignments you are likely to get each month. Some big ones, like Cactus/Editage, could probably send you one every day, others might only have 4 to 5 per month for you. You’ve got to watch your work-life balance though. When you work from home, it is too easy to just plough on all day. I try not to work at the weekend, which is not always possible.

How did you find the transition from being a researcher to being a freelancing editor?

The hardest thing was the freelancing part of the equation. I did not know at the time how viable a career option freelance editing was, and whether that would be something I’d enjoy doing or be good at. The uncertainty of not receiving a steady salary was the biggest psychological hurdle I had to overcome. That’s why, initially, it was just supposed to tide me over until I find a ‘real’ job. But it turns out there are thousands of freelance science editors out there, with many editing companies and publishers relying on their services. I’ve been doing this for over a year now and during that time, I only had about 5 days without any work. The demand exceeds the supply; so, plenty of work. I enjoy doing it and am good at it.

Do you miss the lab bench?

Not really. Had I become a PI, I would have been gradually stepping away from the bench as well. I really enjoy editing. It gives me a lot of satisfaction. I know that I am making a tangible difference. I am happy when I hear from a client whose paper, that I’ve just edited, got accepted for publication. I also enjoy the variety of topics I work on. It definitely broadens my scientific horizons. In contrast, a postdoc increases your depth of knowledge, but may narrow your horizon, as you dedicate your time to mostly one field.

I edit roughly 4 to 5 papers a week (on average 80,000 words per month). One day it might be bone resorption, then berry research, then actin dynamics. Because my background is quite diverse, I am able to relate to most people’s work. Logic and critical thinking are definitely transferrable skills. I still feel like I am doing science, albeit through other people.

I like the versatility of the job and interacting with a huge amount of people from all over the world. I do work long hours, but I don’t commute. I could work in my pyjamas if I was so inclined. Only joking! But seriously, I can work from anywhere in the world where there’s decent internet access, and that is a relief … given the current political situation for example [referring to Brexit and right-wing populism].

Do you think the academic system should support scientists more in finding jobs or even a career?

I am sure that different places approach the support of future scientists differently. However, I feel that young researchers should be presented with a broader array of options for pursuing science as early as possible. I did not know much about a career in editing until I started doing it myself. Had I known about other freelancers, the jump away from a structured job in academia might have been less stressful.

People need to realise that doing science is not just about working in the lab, and that academia is not the only ‘honourable’ option of putting your degree to good use. A course, seminar series etc. on non-academic careers in science is lacking in many institutions.

What would you advise other scientists who are interested in becoming a freelancer?

People do not realise just how much of published science hinges on freelancers – copy editors, substantive editors and so on. Freelance editing is a ‘real’ job. If you are interested, the best thing to do is to google editing companies, read up on their services and see if that sounds interesting. Some publishers offer on-site editing jobs. If you are thinking about freelancing, it is a good idea to diversify. Work with more than one agency to increase the chances of a steady workflow.

Above all, believe in the transferability of your skills from working at the bench. Once a scientist, always a scientist!

Thanks for sharing your insights, Joanna.