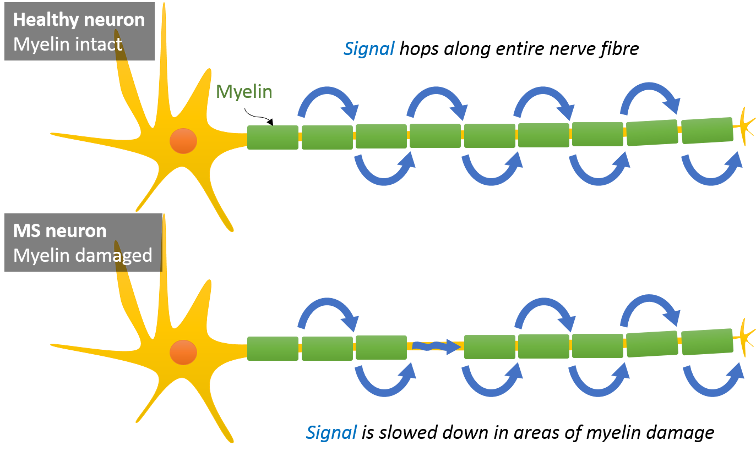 Daclizumab, marketed as Zinbryta, was approved for the treatment of relapsing-remitting multiple sclerosis (MS) in the USA and Europe in summer 2016. Daclizumab has shown superior efficacy when compared to placebo and a standard treatment (AVONEX®, interferon beta-1a) and is believed to be on a par with other novel treatments. It is a once-monthly subcutaneous injection which the patient can administer themselves. This is quite convenient to be honest and if you aren’t into injecting yourself, you can go to your doctor as far as I have heard.

Daclizumab is not exactly a new kid on the block. It used to be marketed as Zenapax as add-on treatment against kidney transplant rejection. However, Roche withdrew the drug from the European market for commercial reasons in 2009, and it is also listed as discontinued by the FDA.

Multiple sclerosis is a neurological auto-immune disease. This means that your own immune system turns against your nervous system.

Your nerve fibres in the central nervous system (i.e. brain and spinal cord) are coated in a sheath made from myelin, a fatty white substance. This sheath has gaps every so often along the length of the nerve fibre – a crucial feature for speedy signal transmission (saltatory conduction). The signal, which encodes information that your brain is processing, basically hops from gap to gap to travel through your brain. When the myelin sheath is damaged or degraded, this speedway is broken, and the signal has to creep along the bare parts of the nerve fibre. As a result, information is processed slower and other unwanted effects occur. That’s what happens in MS. Patients notice that they react slower, experience pain in various parts of the body, impaired vision, fatigue, spasms, loss of mobility and more.

The two main types of MS are relapsing-remitting and progressive. The former is more common and marked by sudden occurrence of symptoms, which ameliorate or completely disappear after a while. This form can turn into a progressive course of the disease where disability builds up gradually. In other patients the disease is in a progressive state from its onset. Their condition deteriorates continuously without phases of temporary recovery.

Currently there is no cure. However, the last few decades have seen quite some development in the biotech and pharma sectors to try and find, if not a cure, at least treatments to ease the symptoms and improve the quality of life.

How does daclizumab work?

Daclizumab is an antibody that selectively binds to the interleukin-2 (IL-2) receptor subunit CD25. Antibodies are part of our own immune defence and are there to bind, for example, bacteria so that our immune cells can deal with them. Thus, in effect daclizumab is an ‘artificial’ antibody that binds a molecule, CD25, in our body. The actual mechanism of action is not fully understood.

The original hypothesis goes as follows. CD25 is found at high levels on activated T cells, the cells believed to play a major role in the pathology of MS. IL-2 is an important protein that stimulates the activation and proliferation of T cells when it binds to CD25. By blocking CD25 daclizumab is thought to block T cell activation by IL-2. However, this may actually not be what happens in real life.

An alternative hypothesis argues that daclizumab treatment increases a subset of natural killer (NK) cells. These NK cells have been shown to decrease activated T cell numbers. In addition, it is possible that daclizumab changes abnormal levels of various immune cells found in blood and cerebrospinal fluid from MS patients to healthy levels. By altering the balance between immune cells, daclizumab is believed to counteract harmful inflammation in the central nervous system and thereby reduce relapses and disease progression.

Problems with the liver and immune system, including auto-immune reactions, are listed as the most severe side effects. This is why daclizumab is not recommended as a first-line treatment. In one clinical study a patient died due to auto-immune hepatitis. It was not clear why this happened and impossible to rule out that daclizumab had caused it. With the alarm bells on high alert after this tragic incident, it can be imagined that auto-immune reactions may also develop elsewhere in the body. This is rather ironic, as the drug is supposed to ameliorate the auto-immune disease MS. Admittedly, that puzzles me. I imagine that, when treating auto-immune diseases, finding the balance is one of the major challenges. You want to halt the health-damaging mechanisms, but need to maintain an immune defence strong enough to fight off every-day germs and infections. Since the immune system is so complex, any artificial manipulation may cause unexpected effects.

Other side effects are skin reactions which can oftentimes be treated with corticosteroids and are expected to be transient. Patients might also develop swollen lymph nodes, allergic reactions, serious infections and colitis originating from the modulation of the immune system by the drug.

Further listed side effects are depression and suicidal thoughts. As random as this may seem, it is not totally off the charts. I once worked in an academic research group studying the influence of the immune system on the psychological state based on the finding that both systems use similar molecules to function and communicate.

Since its foundation in 1978 Biogen helped pioneer the biotechnology industry. Today, it is one of the world’s oldest independent biotech companies with about 7,000 employees globally. They can even show off two Nobel Prize laureates, the company founders Drs Walter Gilbert and Phillip Sharp.

AbbVie “takes on the toughest health challenges” as they claim. Formed in 2013, it is a research-based biopharmaceutical company with about 28,000 employees worldwide. They are keen to collaborate with peers, universities, clinical experts, governments and advocacy groups.

AbbVie’s areas of expertise include immunology, oncology, neuroscience, virology and general medicine. They have an extensive pipeline within this spectrum.