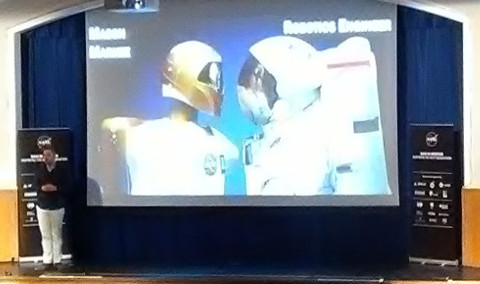 NASA did it again. They came to beautiful Scotland to inspire the next generation to take up STEM subjects. Luckily, grown-ups were allowed in as well.

Robots to conquer the sky

The first presentation was delivered by NASA robotics engineer Mason Markee. He made sense of this year’s topic “To Mars and Beyond” by explaining how and why NASA is developing all sorts of robots. You guessed right. Humans want to conquer the Moon, Mars and other planets. There was talk of extracting minerals and creating human habitats.
Markee likened robots to Sherpas in some respects. Before humans set foot into unknown, potentially dangerous territory, robots will be sent to check it out and prepare the place, just like Sherpas on Himalayan expeditions. Basically, robots will do all the dangerous, dusty and dull work so that astronauts use their precious time on more demanding activities.

Driving a moon buggy is apparently an extremely scary thing because it hops about due to the lack of gravity making the driver feel like they have no control. On top of that, space suits are built for standing, not sitting, making the whole experience even more uncomfortable. To make matters worse, electrically charged moon dust sticks everywhere.
Thus, NASA has been working on a space motorhome that aims to solve all those challenges and more. The rolling base can not only be used to house astronauts for a week, but also to carry large equipment like a space crane.

The human body has quite a clever architecture. So, it makes sense to use aspects of it in robots, such as joints. The hand is a huge challenge to replicate. Robots that look like C-3PO from Star Wars are built that way because they are to fit into the human environment to do the things we do and use the same facilities.

Other uses for robots

Astronaut Bob Cenker’s account of his journey into space was not only informative, but also entertaining; so much so that I could barely bring myself to take notes.
Cenker admitted that space sickness made everything seem upside down and generally gave him a miserable feeling. It took him more than a day to overcome.
Sleeping can be a bit of a challenge when you detach from the velcro. You might end up floating across the cabin and be taped to the wall by your mates. He went on to explain the loo. There is a lengthy procedure to use a space toilet correctly. Of note, the door cannot be shut whilst you’re having a sit-down. He also talked about tidying up the cabin. Because astronauts play with their food, that sounds like a great idea before coming back down to Earth. The key is to get everything done before gravity keeps you on the floor because you can reach every corner easily. How handy!

This article was first published on the Steem blockchain on 26th Mar 2018. It has not been modified since.