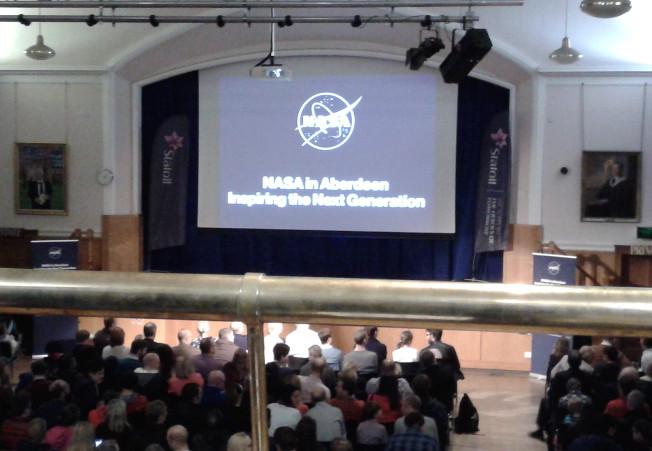 Dr Sue Lederer (space scientist) and Rick Hieb (former astronaut) came all the way from the US to Scotland to spend a week packed full of activities of public engagement and school visits. On 30th Jan 2017 I went to their presentation at Robert Gordon’s College in Aberdeen to listen to them talk about working in space and bust some of the flaws in the movie ‘Gravity’.

Admittedly, I had never watched the movie, but they showed enough snippets to make their points clear. I must say, the two worked really well together. It was not only interesting to learn new things, but also enjoyable to watch them interact. A very well crafted and entertaining seminar.

Right at the start, they made the point that we are all part of inspiring the next generation’s interest in science and technology. We all need to keep the conversation alive after the event. Technology is our future, and we need to prepare the children for that.

Rick, the son of a lorry driver and a teacher, told us about his humble background emphasising that it was not only his parents, but also his surrounding community, including teachers, whose support eventually pushed him through to become an astronaut.

Below are some bits and pieces of knowledge I snapped up during the talk.

Is there gravity in space?

Yes. Anything with mass has gravity. The more mass, the more gravity.

The further away we get from Earth, the slower the orbit.

Anything situated in the geo-orbit is generally a live satellite.

There are various orbits around Earth. We can find the ISS and Hubble in the low Earth orbit; GPS navigation equipment is in mid-Earth orbit. The ISS moves at ca. 8 km/s.

Travelling to the ISS gets humans just above the atmosphere. This means that astronauts see Earth’s massive curvature, not the tiny ball that is sometimes depicted in movies or images.

Space debris is anything man-made that is no longer useful, such as a broken satellite.

23,000 pieces of debris are being tracked by the US Department of Defence. While this may sound like a huge number, consider that a lab experiment of shattering a satellite produces 100,000 to 200,000 pieces! Every single piece is a hazard. It is something that can crash into functional space equipment or astronauts. A tiny loose paint chip can cause a little crater in a window. That’s why the outer windows of the ISS are checked daily and swapped out if needed.

Here is a little bit of relief. If something gets destroyed in one orbit, it usually remains there. Thus, other orbits are safe from neighbouring debris. Also, the speed of items in the same orbit is actually fairly slow as compared to other items in the same orbit, nowhere near as fast as in action movies. On the other hand, items that cross orbits would approach so fast, that you would barely have a chance to see them coming, never mind seek cover.

Two thin sheets of metal are more protective that on thick sheet because a bullet (or anything else) hitting it will shatter on impact at the first sheet. Thus, the second shield will only be hit by fragments. This design is used on the ISS and astronaut helmets.

There are tethers everywhere in space to secure equipment and personnel. Otherwise they would just float away. No serious astronaut would let go or jump about for fun. However, astronauts have so-called manned manoeuvring units (MMU) with a bit of propulsion to move around.

Generally, the pressure is regulated in a way to keep hatches closed. Thus, any sudden opening of an unlocked hatch as in the movie is unlikely.

Astronaut suits have little mirrors on their wrists so they can read the little signs for controls on their suit. For this reason, the labels on the suit are written backwards!

Space underwear contains water tubes which are there to cool the astronaut in their suit. In addition, there is a water pocket with a straw in the helmet so that astronauts can drink during a spacewalk.

Astronauts wear nappies because there is no loo break during a spacewalk. An astronaut may spend up to 12 hours in their suit; 8 h on spacewalk and the rest is required for everything that happens before and after.

NASA teams train together for years. Thus, situations sometimes portrayed in movies where astronauts just get to know each other through a bit of small talk don’t happen.

Astronauts train in a huge water tank. Whilst this is very helpful, things that work in the tank, don’t necessarily work out as smoothly in space due to differences in physics. That’s why it can happen that instead of the usual two-man job, a third person has to come out to help complete a task. This has happened to Rick.

Interestingly, the diving skills from oil and gas divers are very transferable to the space industry.

Rick said that astronaut is basically a fancy blue-collar job. You really have to enjoy hands-on work. If you are not comfortable with tasks like fixing your car tyre, it’s not for you.

Crying in space is a tricky thing. In Gravity a tear elegantly flows down Sandra Bullock’s cheek before floating off into space. This is physically impossible. When you cry in space, the liquid will stay in the vicinity of your eye. The more you cry, the bigger the watery blob around your eye. Watch this video for demonstration.

These are quite literally seminar notes. As such, they may not be free from errors. You are advised to verify all presented statements.

1 thought on “NASA in Aberdeen”